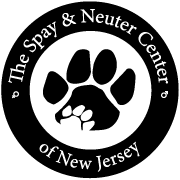 What does indoor rowing have to do with small business ownership?  Most of the time nothing, but for The Spay & Neuter Center of New Jersey something.

In a scramble to prepare for our grand opening back in October, while my partner and I were neck deep in conducting inventory and planning our orders, we realized we were in need of one big ticket item- bedding for our patients.  And lots of it.  My partner was ready to spend our future hard earned money on a trip to the thrift shop.  I placed my hand on her shoulder and said, "Don't worry.  I got this."  Why?  because I know Staten Islanders love animals.  and I know the Staten Islanders who go to Staten Island Crossfit are the best of them.  At my request, avid dog lovers and coaches Dan and Marc were kind enough to make their gym a temporary bedding depot for me to pick up some donations.  Everyone came through for me.  A special thanks goes to Paul, Doug, Rebecca, and Jake  for their extra effort.

The big shout out, however, goes to my friend Carrianne.  She has something like 18 jobs, is an awesome mom and pet owner, and a kick-ass workout partner.  She is also a bit of a sadist.  So when I said I would row 100 meters for every piece of bedding I collected, (and she knows how much I hate rowing) the game was on.  I don't remember her exact wording but something to the effect that I would wish I was dead when she was done with me.

Carrieanne rallied her awesome animal loving coworkers (people who save lives for a living- she's an EMT).  By the time I was done collecting I had 38 pieces of bedding.  I could have taken more, but we lacked space to store it!  I told her double or nothing for comforters, of which I had 3.  So that's 4100 meters.  Who rows 4100m?  Losers, that's who.  So it was on my to do list to do a 5k row.  At the bottom somewhere.  Dr. Potter will also vouch for the fact that I have lots of to do lists, too.  I could have easily misplaced the post-it I had this particular task written on.  I mean rowing is for people who don't run, right?

In all honesty, I was battling elbow tendinitis, fatigue (running a small business can do that), then training for a couple of races.  Every time I walked past my rower, I managed to find something else to store on it.  A jacket, a book, a child...anything to avoid sitting on it.  But that 5k was in the back of my mind.  An albatross.  I kept telling Carrianne that I owe her.  I knew she is not one to forget, and I knew, eventually, she would find me.

Finally, this Sunday afternoon, 8 months after I made a promise, I had nothing better to do because I can't run (I hurt my leg running-awesome job, Dr. H!).   I decided to make it happen.  It wasn't pretty, but like a Lannister, I pay my debts.  I didn't videotape it, because that would be really boring and embarrassing to watch.  But it did happen and I have the sweat angel to prove it.

So Carrianne, Staten Island Crossfit, and the 1158 dogs cats and rabbits to date that have comfy bedding to recover on:  this one is for you. And let me reiterate-I hate rowing.  -Dr. H 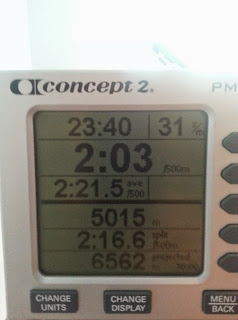 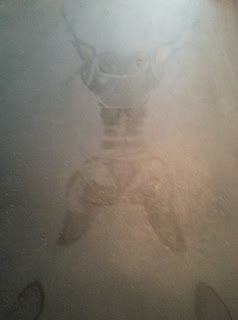 Posted by The Spay & Neuter Center of New Jersey at 3:32 PM No comments: